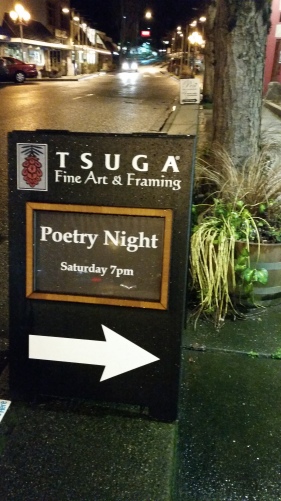 After a long four months of settling into my new home, finding a bed, assembling evil Ikea furniture, etc …  I knew I had to find where local writers and poets hang out and meet each other. Through the website, MeetUp, I was able to find several poetry events in and around the Seattle Area.  Tonight, I went to the February Poetry Night even at Tsuga Fine Art & Framing. The owner, Ken (whose last name escapes me like so many nouns) and his wife host the event at 7pm on the 2nd Saturday of each month.

Tonight, the feature poet was Francie E. Walls. As her biography states, Ms. Walls has worked as an English teacher, college librarian, library director and professional photographer. Her poems appear in the book, Writing Across Cultures: A Handbook on Writing Poetry and Lyrical Prose, and magazines such as Pontoon, Arnazella, PoetsWest Literary Journal, and the RedWing Anthology. She has traveled around the United States and to Africa, Cuba, England, Wales, Ireland, Europe and the Middle East.

But, most of all, her poems are beautiful.

She opened the night with a theme and a goal — she was taking us to places we have never been before.

And she did. Vivid, poignant, expressive, and moving, Ms. Walls’s poetry often kept me from taking notes. The first poem, “Chrysanthemum Cafe” plucked me from my notebook and sat me into a lovely cafe with a tea called blue people. She wrote about deserts and circus and child birth and death with such a deft hand that I wondered if she had speaking from first hand experience.

Ms. Walls set the mood for the night and each poet that read afterwards was a joy. Many of the poets were established (published) writers. Talia Jin, a young poet, performed a spoken word piece called “Cigarettes” and read her poem “Sound of my Planet,” which was inspired by the sounds of planets as recorded by Nasa. Terry Bush, like many of the older poets, spoke about the desert and the lack of rain (while it was raining outside). He also read a beautiful Valentines Day poem, which was dedicated to his wife.

Kevin O’Conner read several love poems. In one there is an equation 1 + 1 = ∞ when you are in love. A line that stood out was “What does math have to do with love?” I enjoy his wit and his honesty.

There were many other poets and writers of note at the event. If you are ever in the Bothell, WA on the 2nd Saturday of the month, stop by this event.

I do plan on attending again.

Until next time, my lovelies.

A blog for students of the UW iSchool.

My quest for strength, fitness and superpowers

Hope in the goodness of Humanity.

A wee anthology of dark yarns.

Hacking life while enjoying everything in between

Musings and books from a grunty overthinker